It’s been a little while now since I’ve been home and I can honestly say it has taken me this long to get myself back on track. As previously mentioned I had a tough time settling back in but now I’m finally moving forward. I was quite reluctant to share my East and West Coast photo diaries as I was wanting to focus on other things however I know there are some of you who wanted me to share my images (you can find my daily travel adventures at the time over on my Instagram). I had imagined taking a huge variety of photographs all while appreciating these beautiful places in real life but due to weather in certain places (hello New York ) and the fact that I want to keep some of those memories private – I am just going to share a few from each location with you.

My first pitstop – good old New York. I think this was my fifth time in the Big Apple and every time I take that journey from JFK, my heart skips a beat when that famous Skyline appears. The weather however was not great for July – hot but rained (hello overspending in Macy’s) . I didn’t mind too much as it wasn’t my first time at the rodeo … I had been to pretty much all of the attractions I wanted to visit previously. I just wondered around (I always forget just how much walking is involved), took a refreshing walk along the Highline, paid a visit to Central Park and met my brother for a fab evening in Little Italy. We had a delicious meal at New York’s oldest pizzeria – Lombards. It was proper old New York .. like being in a scene of The Godfather! I spent my Saturday over in Brooklyn at the super chic and trendy Dumbo, my absolute new favourite place. It’s so unbelievably cool and the views of the city from the bridge are one for the camera roll. The brunch spots, architecture and all round more chilled out vibes made it the perfect place to spend my Saturday afternoon. It was in the city that I first met my travel buddies for the next few week’s. We spent the night staying on the West Side before packing up our bus for our first roadtrip of the holiday – next stop Washington D.C! 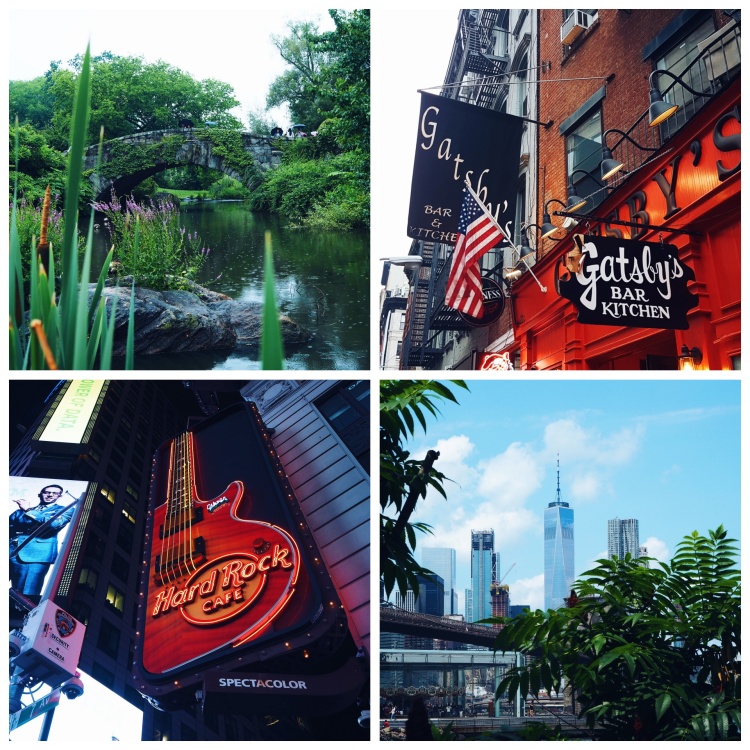 Despite who is currently in charge of America none the less I was still very excited to hit the Capital. I have spent years obsessing over American politics and countless hours watching The West Wing and Madame Secretary. To see The White House and Capitol Hill in real life was a dream come true for me – although the President’s house is a lot smaller in real life! It was a hectic day that consisted of my two favourite attractions alongside a visit to Arlington National Cemetery, The National Mall – Lincoln Memorial, Reflecting Pond (Forrest Gump throwback) and a hop on/hop off bus tour. Absolutely exhausting day but worth it as I’ll always remember that day. I really enjoyed Arlington (in a non eerie way) as I was intrigued by JFK’s tomb and the Kennedy’s eternal flame alongside the Unknown Solider and the Challenger Shuttle memorial. I’m a NASA geek deep down so needless to say I was in my element when we paid a visit to their memorial. In between travelling from D.C to Nashville we stopped in Shenandoah National Park and Appalachia for some hiking, breathtaking views and camping in the forest. I absolutely loved the camping side of our trip – it was so surreal at times. Being born in a city it’s rare that I get the chance to sit round that all American camp fire (enter those mouthwatering S’mores) and watch the sunset with pretty little fire flies surrounding me. Bliss! 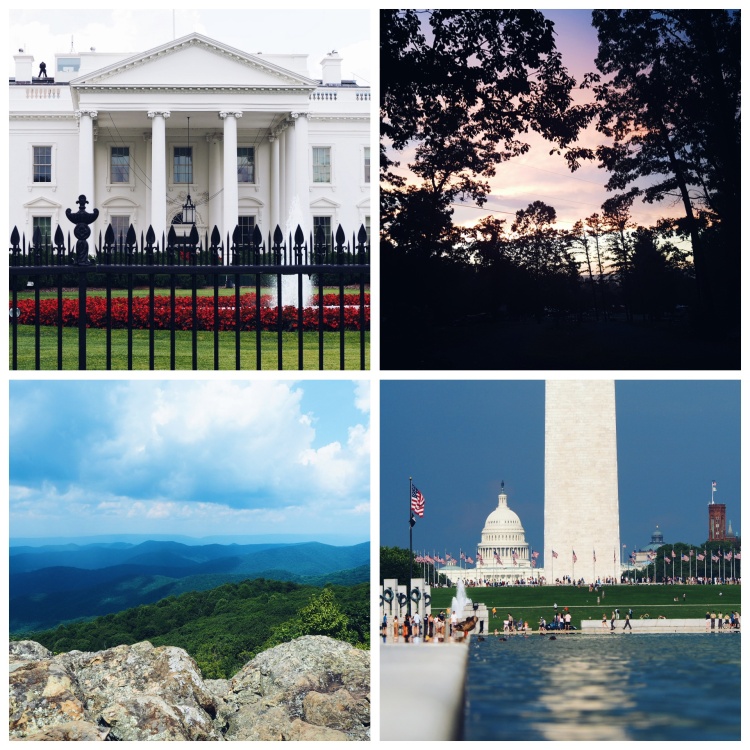 Ahhh I have such memories from this incredible place! The music is like nothing I’ve ever experienced – listening to Country songs on the radio/TV is nothing compared to standing in the infamous Tootsies Orchid Lounge and watching such talented people sing. It’s a little honky-tonk bar that has three live stages that covers various style of country music -singers such as; Dolly Parton and Patsy Cline have all sang here.  The band that were playing (I forget to get their name!) were out of this world and they performed a host of eclectic songs from Bruno Mars Uptown Funk to Dion’s Runaround Sue. Obviously they mixed in the traditional Johnny Cash songs but that was by far thee best bar within the entire trip! Actually funny story … when we left Shenandoah we had a stone in our tyre from our camp ground that needed changed. Fast forward an hour or so and we all welcomed a spontaneous pitstop in Knoxville at 10am which led to drinking shots of Moonshine Whiskey and exploring a brewery within the town square. I loved how easy going the entire adventure was – these kind of stops made the journey that bit more exciting (even though it was a pretty thrilling trip already!). Naturally I headed to Wendy’s for my first ever burger experience from the famous brand so soak up the alcohol downed at that hour of the morning!!

When we were driving into Memphis the lovely Sarah (our CEO) played Walking in Memphis to kick start the excitement of our next stop. Having heard the song thousands of times throughout my life I didn’t quite soak in the words until I was standing down in the Jungle Room of Graceland. I spent a beautiful yet insanely hot afternoon indulging in the Elvis Presley Experience. I was on my own for this tour which I actually loved as I ventured around at my own pace and explored The King’s home, private planes and centre where his records, clothes and cars were all stored. Seeing his home really left an effect on me – especially his grave site beside his pool where he is buried alongside his family. It was a truly breathtaking tour that I would recommend to anyone – there are two types; his home only tour or the entire experience which I opted for. Our CEO’s also very kindly surprised us with a visit to the Lorraine Motel where Civil Rights activist Martin Luther King was assassinated. I got chills down my spine standing at this Motel and looking up at the balcony of room 305 – such a surreal moment that I’ll cherish forever! I’m a HUGE Man v. Food junkie so when we arrived at a local restaurant beside the Motel that served a pulled pork sandwich I nearly lost my sh#t! Having scuffed it into me, we headed to the famous Beale Street for a night of cocktails, Tequila shots (the funniest video ever!) and me motor boating one of my favourite new people on my trip! haha .. enough said! 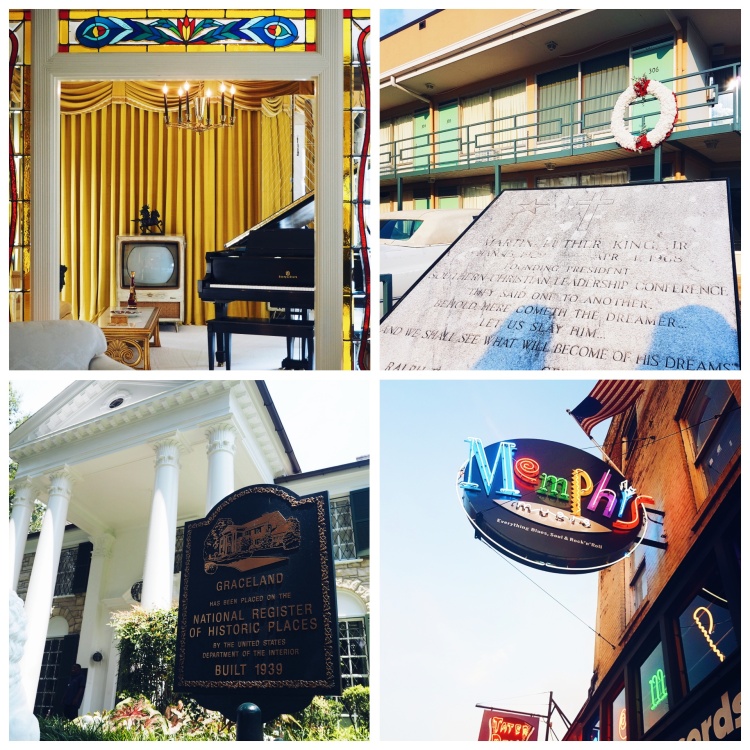 I recently watched the new movie, Girls Trip and I have to say that it painted the vibrant antics of Bourbon Street in a completely different manner. Yes it is incredible to say that I’ve been to New Orleans but it wasn’t what I expected. I couldn’t really relax in it – I think I was longing after those Nashville & Memphis bars. I was unbelievably hungover by the time we reached it (worst bus journey ever but a fun exploration of some Alligator swamps – how cute is Little Bruce?!) and I think everyone was exhausted as this was the final stop of our East Coast adventures. Keep in mind the amount of alcohol we had consumed since NYC therefore our liver’s were slowly but surely starting to shut down (I blame the Tequila). I was somewhat sad because some of the group that quickly became family were driving on through to Texas as the rest of us were flying to L.A. Most people went back to the hotel after dinner but a few of us headed to the crazy street for a few cocktails. I set up camp in the iconic Tropical Isle for some of their rocket fuel cocktails – hello Hurricanes and Hand Grenades. The day I arrived home from my travels there was a drunken postcard waiting for me from the bar – for every cocktail purchased they post one for you! 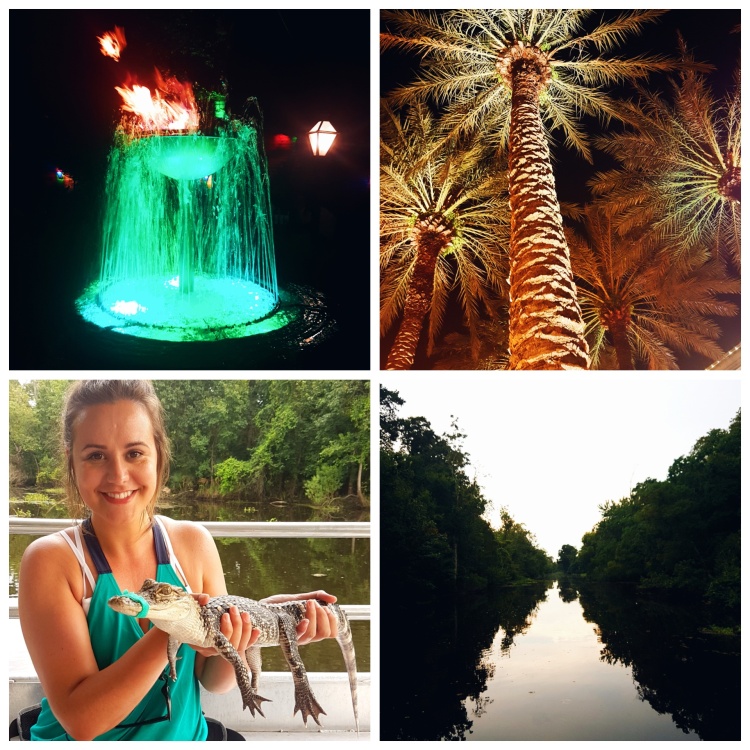 My heart genuinely belongs to the East Coast – Nashville and Memphis sealed the deal for me along with the glorious camping experiences. I loved the forest lifestyle and the memories made with my East Coast family, I missed them terribly when we ventured off to LA! They stole my heart (and some of my dignity) but I treasure those crazy people.

I will be uploading my final instalment from my Best of the USA next Wednesday – my West Coast experiences. Hope you enjoyed today’s post, I’m going to incorporate plenty more travel features into my blog. Lots of huge changes coming soon for me and my life so stay tuned!

There was an error retrieving images from Instagram. An attempt will be remade in a few minutes.